I am writing to commemorate my 10 years in the United States, at a time when the U.S. government is turning its back on millions of refugees. I hope the story of my decade in Lancaster will inspire you to stand with all refugees, so they can succeed and contribute to this community.

My journey to Lancaster began in 2010, as a young refugee boy with illiterate parents and three siblings. My family was forced out of Bhutan, where Nepali people faced torture, rape, immolation, drownings and life imprisonment. Our land and possessions were seized. We escaped in the middle of the night to avoid being killed. After 17 years in a refugee camp, we joined the lucky 1% of 59 million refugees around the world eligible to resettle in the U.S. I remember the complicated processes, years of background checks, health updates and uncertainty before finally arriving in Lancaster.

Here, we faced new obstacles but were hopeful. I struggled at first, but learned English quickly. I challenged myself during two years at McCaskey, taking rigorous classes and staying after school daily to work on projects. I was active in extracurricular activities, held officer positions in the Asian Cultural and Red Cross clubs, and was inducted into the National Honor Society. 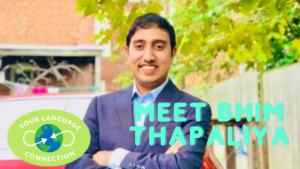 But my achievements meant little because I soon realized other refugees were struggling. That community needed help, and even though I was becoming a community resource, I couldn’t do it alone.

To address these needs, I needed help. Lancaster has many people who jumped at this opportunity. My friend Rick Jackson helped me create an English as a second language project that would eventually become my educational mentoring nonprofit. He connected me to churches, nonprofits and friends who created a support system.

People like Ruth and Allen Morehead opened their hearts and home to a stranger, supported and guided me, and accepted me like their own child. Organizations that support refugees and immigrants — such as Church World Service Lancaster, the Lancaster-Lebanon IU 13, the Literacy Council of Lancaster-Lebanon, and Citizens for Immigration Refugee Action Committee — made my future endeavors a reality.

Heading off to college was the scariest step yet. My first-year adviser at Elizabethtown College, Ann Marie Potter, was my desperately needed support system. She became my best friend, encouraging me when I felt like giving up. I was the first in my family to attend a U.S. college, starting after only two years in Lancaster. The community that had surrounded me since I arrived played a huge role in my achievement.